Few who try to play the Elevator Game see it through to the end and fewer want to talk about the experience.

The game began as an obscure piece of sleepover-lore, but gained notoriety in the wake of a particular murder case...

Two detectives are investigating surveillance footage of a mare behaving oddly in an elevator.  The video is glitched and broken and someone--or something-- is watching them from afar.

The Elevator Game is forged out of my nightmares: Late-night wiki-walks, J-horror, urban legends, and glitchy, grainy videos from the depths of hell. Made for Ectocomp 2017.

This was super cool!!! I played it for Halloween (didn't get the video up quite in time for Halloween, but still). I can't wait to check out your other games! This was super unnerving and creative and weird in the best way possible-- keep up the amazing work :D

Oooh, this is the first Let's Play I've gotten for any of my games. That is so cool. I watched the video with a friend of mine and I was happy about the fact that you managed to jump-scare us a couple of times, we weren't expecting that! It was a good Lets Play and I liked the creative touches. I have to confess that it is a linear game, I originally planned more parts, but I was running out of time before the deadline of Ectocomp. I feel bad about that whenever people play it for the first time and think they must have done something wrong. I might make a sequel out of the branch I had to cut some day, I'll have to make up for it in that. 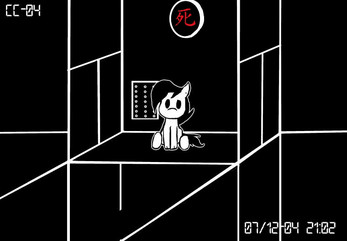